At the beginning of the 20th century, mathematician and financier Ralph Nelson Elliott discovered that stock markets did not behave randomly. On the contrary, in most cases, they follow the laws of nature, based, inter alias, on Fibonacci ratios. Elliott concluded that market movements can be predicted, not only the direction but also the following corrections and the size of these movements.

The wave principle is based on the idea that the rise and fall on the price chart has a regular sequence, which Elliott called waves. In its usual form, the market movement consists of five waves in the direction of the trend (known as 1, 2, 3, 4 and 5) and three waves that form the corrective movement (known as A, B and C). 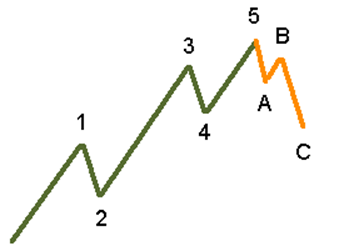 The Elliott Wave Theory was further developed by Alfred Frost, Robert Prekter, and Robert Miner, who created many rules on how to use waves in practice. Below you can find some of the most important rules:

2. Wave 3 cannot be the shortest in length and time, compared with waves 1 and 5.

Below you can see an example of the structure of Elliott waves on the daily chart of the EUR/USD pair:

Now let’s see if the four above rules are violated in this example:

Below you can find another example of the Elliot Wave structure, this time on the 4-hour interval of the EUR/GBP chart:

And here four of our rules are observed.

As you can see in these examples, the Elliott wave theory is fairly consistent and highly functional in determining market trends. However, it should also be said that you should use at least one technical indicator to confirm your forecast. In this way, it will be possible to reduce the error of analysis and increase the effectiveness of transactions with non-deliverable OTC financial instruments.

Elliott Wave Theory is a rather complex kind of analysis that takes time and perseverance before you can put it into practice. Many customers apply the principles of the Wave Theory in combination with other technical analysis tools, thereby increasing the effectiveness of their forecasts.