In order to become a successful client of the Forex in Belarus, you must know the basic macroeconomic indicators and learn how to assess their impact on the market.

Let’s start by identifying key macroeconomic indicators that are drivers for the OTC Forex markets.

GDP is the broadest indicator of a country’s economy and shows a total market value of all goods and services produced over a period of time (most often, GDP is being counted for a year and a quarter). In itself, final GDP is a driven indicator and by the time of its release the market is already completing main movement. Therefore, most investors pay particular attention to the reports that are published several months before a final GDP.

These reports can cause significant market volatility.

CPI – consumer price index – is the most important indicator of inflation. This statistical estimate is based on the cost of the underlying assets included in a representative sample over a given period of time. CPI measures rise in prices for goods and services and is calculated for various categories and subcategories.

If the digit of the consumer price index is higher than expected, this is often a basis for a central bank to raise interest rate, and this in turn can lead to increase in value of foreign currency. Therefore, during CPI growth foreign currency also begins to grow.

Retail sales – a monthly indicator that is of great importance for clients of forex companies, since it shows the purchasing power of consumers.

The higher the number, the higher expectations for economy, so a positive release often means GDP growth in future.

Data on a labor market can be an important factor in the OTC Forex markets. Two of the most significant reports are the aforementioned level of new jobs in the US non-farm sector, as well as the number of unemployment claims.

The unemployment rate shows a percentage from the total labor force, which does not have permanent employment, but actively looking for it and is ready to work.

Before studying reaction of the market to the data on a labor market, let’s analyze internal dependence of economy on this indicator.

A steady increase in the unemployment rate is a manifestation of a deteriorating economic situation in a country, and this is perceived by the markets as a negative signal warning of a possible decrease in foreign currency.

It is believed in the market that the higher the unemployment rate, the weaker a foreign currency.

The most important cyclical data is published in the United States every first Friday of a month at 2:30 p.m. CET and are known as Nonfarm Payrolls (the level of new workplaces created in the non-agricultural sector).

A high value of this indicator is a positive signal and can contribute to an increase in cost of a foreign currency (in this case, USD).

Below we give an example of publication of this news, which turned out to be better than expected. The US dollar rised due to this news, and the GBP/USD, pair, respectively, went down. 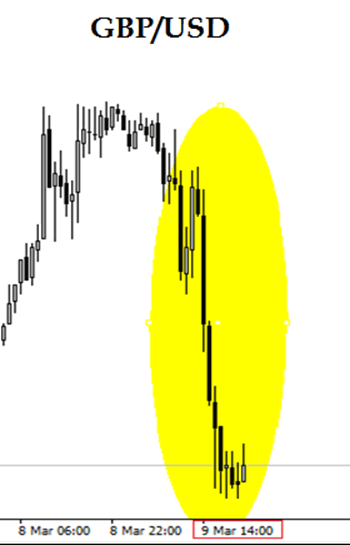 Let’s move on to another important factor that determines behavior of exchange rates – we are talking about interest rate.

Every client should know that an increase in interest rates automatically means a higher return on investment in a given country. And we are talking about “safe” investments, when free capital is transferred from the country where interest rate is lower to the country where it grew. As a result of this, foreign currency of a country with a high rate begins to grow. And vice versa – with a decrease in interest rate, foreign currency loses attractiveness for long-term investors and begins to decline in price.

As an example, let us cite a situation when the governing council of the European Central Bank (ECB) made an unexpected decision to reduce the rate from 1.5% to 1.25%. Reaction of theEUR/USD pair was as follows: 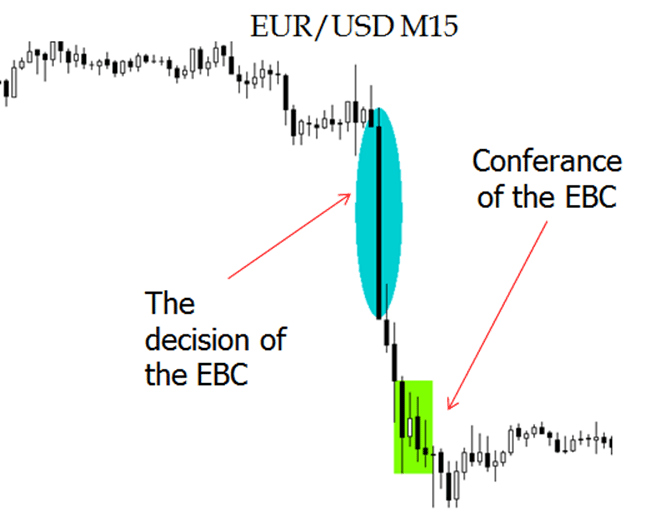 As you can see, releases of macroeconomic data have a strong effect on markets, causing volatility surges. At the same time, we want to warn you that sometimes the market manages to take into account news before they are published, and final movement after release of an indicator is not too large, or does not correspond to the nature of the news at all.

If you want to learn more about other important macroeconomic indicators, as well as how to make transactions with non-deliverable OTC financial instruments on news, we invite you to participate in full-time Forex training courses from the FTM Brokers company.